The Islandica Series: Companion to the Fiske Icelandic Collection

A guest contribution by Patrick J. Stevens. In October 2013, NordicHistoryBlog graciously published a guest contribution under my name describing “The Fiske Icelandic Collection in the Cornell University Library.” This generous space allowed me to rehearse some history behind the founding of the collection by Daniel Willard Fiske, to mention the vital contributions of Halldór Hermannsson, the first curator, and to offer a summary of activity into the twenty-first century. I closed with the following remark:

In recent years, the venerable Islandica series marked a quiet centennial by publishing two volumes of essays and, a few years later, a monographic study; all three works were dedicated to advancing Old Norse-Icelandic studies. All new volumes of the series are available both electronically and in print….

The Islandica series, published by the Cornell University Library, has since its “quiet centennial” in 2008 continued publishing monographs, necessarily on an irregular schedule because of the complexity of each volume and with modest resources in terms of staff and funding. The chief desideratum shared among authors, translators, our compositor, and the managing editor is to sustain the highest possible level of textual precision in the service of Icelandic and Norse Studies.

“A Series in Icelandic and Norse Studies” is an innovation for Islandica, a change of subtitle that endeavors to encompass the medieval Norse cultural and geographical reach and its modern, predominantly Icelandic, manifestation in the islands of the North Atlantic. Hitherto Islandica had been “a Series [even earlier: an Annual] Relating to Iceland and the Fiske Icelandic Collection,” and while series and collection perpetuate their relationship, the need to focus outwardly and acknowledge implicitly the international nature of scholarship in Norse and Icelandic culture became increasingly evident.

So it was that the three volumes appearing after Islandica 55, Theodore M. Andersson’s The Partisan Muse in the Early Icelandic Sagas (1200-1250), relied on veritable international teams for completion. Islandica volumes 56 and 57 (published 2014) had Icelandic authors, British translators, and an American managing editor; and contributors to Islandica 58 (2015) were living or working in Iceland, the United Kingdom, Canada, and New Zealand as well as the United States. 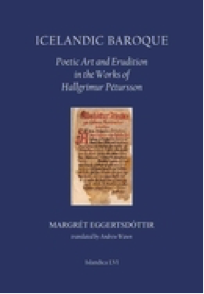 Icelandic Baroque: Poetic Art and Erudition in the Works of Hallgrímur Pétursson ((Jacket illustration (used by permission): the poem “Aldarháttur” by Hallgrímur Pétursson copied in the manuscript Kvæðabók úr Vigur, AM 148 8vo, Árni Magnússon Institute for Icelandic Studies. Translation of the book was supported by Miðstöð íslenskra bókmennta (Icelandic Literature Center), Hagþenkir: Félag fræðirita og kennslugagna (Iceland), and Letterstedtska föreningen (Sweden).)), by Margrét Eggertsdóttir ((Research professor, Manuscripts Department, Árni Magnússon Institute for Icelandic Studies.)) , is Islandica volume 56. Originally Margrét’s dissertation for the D.Phil. (University of Iceland), the book appeared in 2005 as Barokkmeistarinn: List og lærdómur í verkum Hallgríms Péturssonar. The masterful translation by Professor Andrew Wawn (emeritus, University of Leeds) afforded the author an opportunity to update features of her study as well as disseminate the results of her profound research to an interdisciplinary academic readership. Margrét has long been recognized as a leading authority on the poetry of Hallgrímur Pétursson (1614–1674) ((Hallgrímskirkja, the massive modern church that today dominates the skyline of Reykjavík, is named after him. (Hyperlinked image created 13 August 2014 by Diego Delso; may be reproduced under CC BY-SA 4.0; found in Wikimedia Commons.) )) , the Icelandic Lutheran pastor best known for his fifty Passíusálmar, which were first published in 1666. Margrét has served as one of the main editors for the ongoing publication by the Árni Magnússon Institute of Icelandic Studies of all of séra Hallgrímur’s works. 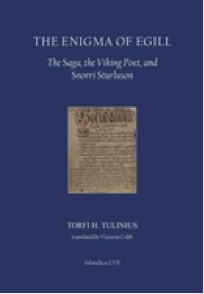 Islandica volume 57, The Enigma of Egill: The Saga, the Viking Poet, and Snorri Sturluson ((Jacket illustration (used by permission): Detail of incipit page of the poem “Höfuðlausn,” attributed to Egill Skallagrímsson and found in manuscripts of Egils saga Skallagrímssonar. From Lbs 636, 4to, 64v. National and University Library of Iceland.)) , by Torfi H. Tulinius ((Professor of Medieval Icelandic Studies, University of Iceland.)), is a revised translation of the author’s Skáldið í skriftinni: Snorri Sturluson og Egils saga (Reykjavík: Hið íslenzka bókmenntafélag and ReykjavíkurAkademían, 2004). Preserving the structure of the original work, the author revised many of his conjectures and conclusions about Egils saga Skallgrímssonar and also added a number of references to new studies that have been published by the international community of scholars since 2004. As much a new edition as a translation, The Enigma of Egill represents Torfi’s current thinking on Egils saga and its possible author, and significantly reflects ongoing study of this stylistically and structurally remarkable saga.

Victoria Cribb was a felicitous choice as translator of The Enigma of Egill, having pursued doctoral studies in Old Icelandic at the University of Cambridge and rendered into English novels by Arnaldur Indriðason, Sjón, and Gyrðir Elíasson. The author also acknowledged with appreciation his research assistant Anna Katharina Heiniger from Switzerland. 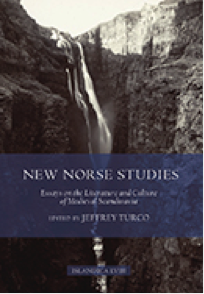 New Norse Studies: Essays on the Literature and Culture of Medieval Scandinavia, ((Cover illustration: Glymur, in Hvalfjörður (Iceland), a gorge 1,200–1,500 feet (ca. 366–457 m) deep. Icelandic and Faroese Photographs of Frederick W. W. Howell, Fiske Icelandic Collection, Cornell University Library. The volume was published in paperback with the intention of facilitating its availability to student readers.)) edited by Jeffrey Turco ((Assistant Professor of German, Comparative Literature, Medieval and Renaissance Studies, and Religious Studies at Purdue University.)) as volume 58 of Islandica, brings together twelve original contributions on aspects of Old Norse-Icelandic literature that continue to challenge scholars in the twenty-first century and here receive close consideration from a range of rising and established authors in the field.

In his introduction to New Norse Studies, Jeffrey Turco notes that the first three essays focus on “the ‘background,’ in various senses of the term, of saga narrative (although, one should note, not on a traditional quest for ‘origins’),” while the last three he terms “sui generis as far as this volume is concerned, although not in and of themselves.” Four essays on aspects of poetics and two on gender roles form the intermediate matter of the volume. The studies of poetics, notes Turco, “are conjoined by marriage, if not by blood.” While the first two numbers in this quartet treat “the fraught nexus of skaldic poetry and saga narrative,” the latter two move more toward emphasis of poetic effect on prose. It is fittingly within the spirit of this volume that one essay ventures out to the Faroe Islands, while another focuses on recital and dance of traditional Icelandic ballads.

All volumes of Islandica published since 2008 are available in open access. The advantages of this feature are self-evident in terms of facilitating research; nonetheless, experience suggests that the printed versions of the books remain sought after. The hope expressed in 2013 that we would also be able to facilitate online access to early volumes of Islandica through the resources of the HathiTrust Digital Library has come to fruition: the first fourteen volumes are now electronically available through the series’ published volumes page and marked with the symbol . We hope eventually to see the entire series accessible in electronic format.

The Islandica series currently has several manuscripts at various stages of production from proposals still in ovo to manuscripts in pre-flight proofreading. There are no theoretical topical limits; any subject from the earthily archaeological to the literarily esoteric and from medieval to modern is fair game. Scholarly bibliographies have inhabited the series since its inception, the latest work in this genre being Kirsten Wolf’s 1998 compilation of An Annotated Bibliography of North American Doctoral Dissertations on Old Norse-Icelandic Studies (Islandica 50). The several translation projects of recent years have explicitly served in part to try to bring aspects of the Norse and Icelandic world to a diverse readership, and the inclusion of translations in Islandica will continue with this purpose in mind.

All authors who have contributed to the Islandica series have both advanced the creative scholarship of Icelandic and Norse Studies and given continuing life to the brilliant legacy of Daniel Willard Fiske and Halldór Hermannsson. It would be remiss to exclude from this update on the Islandica series a word of appreciation for the collaboration of the distributor, the Cornell University Press.

Patrick J. Stevens has been Curator of the Fiske Icelandic Collection since 1994. He is managing editor of the Islandica series of Icelandic and Norse Studies associated with the collection. He is also selector for the field of Jewish Studies in the Cornell University Library.